Part one - What are the types of led stage lighting

Today, I will introduce the distribution of led stage lighting on the stage, which can be divided into front light, back light, top light, side light, foot light, etc. The light positions are as follows. 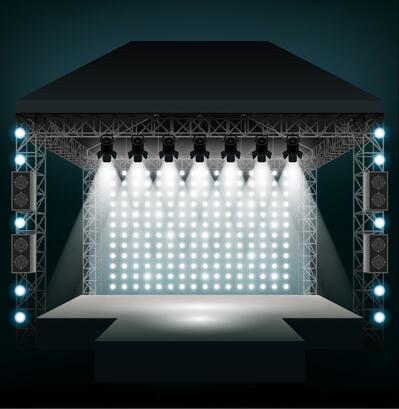 Installed at the top of the auditorium outside the stage curtain. The light is projected from the front to the performance area in front of the stage, and the lights that illuminate the faces of the actors are surface lights. It can achieve universal brightness and eliminate the "dead spots" that are easy to produce in the picture. It can also adjust the light ratio and increase or decrease the contrast to show the effect of equalization and avoid partial underexposure. However, if this kind of light is not used in conjunction with other light levels, the tone will have no brightness level and three-dimensional effect, which will appear dull. Therefore, it can only be used as basic lighting and basic color, and does not take on the main task on the stage. It cannot be a tool for the main light and sculpture image. Lamps should be led fresnel spotlights with good performance. Also known as the theatre stage light, the lighting installed at the front end of the second floor of the auditorium can increase the overall brightness of the front of the stage with lights. Floodlights can illuminate the stage and the auditorium close to the stage. The stage light can be used for TV broadcast. As well as the report of the conference news, auxiliary lighting is provided. The light is projected on the stage performance area from both sides and low front, which is a supplement to the opposite light. This lighting will make the face of the actor appear almost completely flat, and the actor also tends to merge closely with the background and cannot stand out. On its own, this is an unimportant lighting angle. However, despite this, frontal light is also useful. For example, if an actor has a face with sunken eyes, it may look uncomfortable if the light is set from 45 degrees. If you carefully use a lower projection angle to cast frontal light, you can make up for too strong shadows.

Slap (outside the stage light):

The light is cast from the side to the light positions in the stage performance area, which are called left and right slaps. It is used to enhance the three-dimensional sense of characters and scenery, and form the lighting effect on the front side, resulting in a harder shaping effect. If it is matched with the light ratio of the dark part properly, it can get rich and powerful sculpting effect. The angle of view of a person is most sensitive to the changes of the side light. The side light is the main light of the light-receiving surface of the character and the scene, an important tool for modeling; mainly modeling, supplemented by lighting, in order to achieve vertical lighting, no less than 2 lights in the horizontal direction . When two or more rows of slaps with the same light color are projected at the same time, the high-position lamp usually projects the high-beam area, and the low-position lamp usually projects the low-beam area.

The slap lamp can be installed or placed in the slap room. The slap room should not obstruct the passage of the audience and not obstruct the view of the audience at the side seat. The optical axis of the lamp extends through the edge of the stage frame to the horizontal projection of the performance area and the horizontal clamp formed by the central axis of the stage. The angle should not be greater than 45°. The slap room does not block the audience's sight, so that the audience in the side seats can see the side frame of the platform, and at the same time, it does not affect the sound transmission of the platform speakers.